Talk about the weather?  It’s one of those things novelists are told never to do.  Not ever.  It’s boring, the writing teachers and the literary cognoscenti tell us.

But here in Britain, we talk about the weather constantly.

We’re talking about how it took more than 24 hours to dry out the clothes we wore for riding last week–our waterproofs, that is.  We’re talking about the fact that yesterday the cottage of some friends was flooded.  And with more rain forecast, it’s likely they’ll be flooded again.

And we’re all cynically laughing at the Met Office and the government who only weeks ago were telling us we were in the midst of a terrible drought and that we’d need a hosepipe ban all summer long if we were to avoid serious water shortages.  Ya, right.

As I say, it’s constant.

We’re not the only society to be weather-obsessed either.  I’m told the Scandinavian languages have dozens of words to describe snow, but very few words for things like bikini and scalding sand.

So, when one goes to write historical fiction, how does one tackle this?  Because when you look back through history, particularly at any pre-industrial society, you’re looking at a group of people who were even more weather obsessed than we are today.

Because for them, it wasn’t just a matter of what shoes shall I wear tomorrow, and transportation wasn’t a matter of a dash from the warm insides of a well-insulated house to a warm car to the warm office.

No.  It was about walking or riding on roads that were eight inches deep in mud; it was about the kinds of shoes the horses needed to be shod with; it was about catching cold and becoming seriously ill; it was about one’s only set of clothes never quite drying out and the rain coming through the thatched roofs; it was about the ground being thawed for seedtime and the harvest being spoiled by rain.

The moods of the weather frequently determined the difference between destitution or survival.  Quite literally.

The weather, in a lot of ways, might even be considered a prime player, the one constant character in all their lives.  Because in many ways, it was.  It determined the fate of vast military invasions, retreats, and battles. 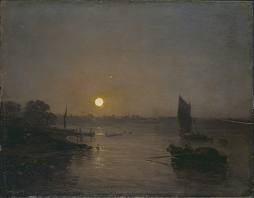 Europe and Britain were in the grip of a mini-Ice Age during the second half of the 18th century and into the next several years of the 19th century.  The winters were exceptionally cold and very snowy with blizzards becoming commonplace.  (I know it’s hard to believe!)

On 15 December 1796, a fleet of 43 ships had sailed from the port of Brest in France bound for Ireland, carrying an invasion force of 14,450 troops and a further 41,644 men.  Following them was a further 17,000 men sent by the French Directory to aid in an Irish insurrection and a French take-over of the country.

And yet, because of the weather, this new French Armada made no more headway than had the Spanish Armada of 1588.

During the journey much of the fleet was blown off-course by the strong winds and gales.  And even as the Republican ex-pat Irishman Theodore (Wolf) Tone was composing his address to rouse his countrymen to insurrection on the 22nd December, gale force winds and a blizzard swept across the west of Ireland.

By the 24th, only 6,500 of the original invasion force could be accounted for.  And the leader of the expedition, General Hoche–believed to have been blown off course into the Atlantic–was lost.

But by Christmas Day, the weather had improved and those French Republican troops in Bantry Bay were enheartened.  The fleet was not 500 metres from shore.  And the Irish defences, let’s be honest, were paltry–perhaps a total of 1400 troops altogether?  A cake-walk, surely.

But by Boxing Day morning, the storm had returned–a severe gale battered the fleet, the fog was so thick one could barely see the length of a ship, and freak waves were breaking on the decks, smashing windows, flooding cabins.  And when the intelligence suggested that the storms had grown so violent that they could not be expected to ride it out,  they raised anchor and were blown “so far to leeward as to look like specks on the water.”

By the 6th January, only two ships remained in the Bay, and by the next morning, they too were gone–fled back to France.

The weather continued extreme over the next decade and the years 1808-1813 saw harvests ruined by cold summers, lack of sunshine and perpetual rain.  So much so that the British government had to buy grain from the fledgling United States to feed the British army operating in Spain during those years.

And the year of 1812 was even worse than previous years.  A very cold winter lingered on for weeks past the normal thaw.  The incessant rain had made Britain’s clay soil so thick and heavy as to be unploughable.  When the farmers finally did get the fields sown it was three weeks later than usual.   The summer was cold and dull.  And harvest was a rushed affair–with farmers struggling to get in their crops before the autumn frosts.

But if it was bad in Britain, it was worse in Europe, 200 years ago.  For that was the summer that Napoleon invaded Russia–with his 550,000 troops.  And here’s the thing–French troops didn’t have long supply trains back to depots.  No, they lived off the land where they were stationed.

Napoleon had laid his plans for invasion based on the grain and crops being ripe and ready for harvest as his troops marched through Prussia, Poland, Silesia, Lithuania and Russia.  But the harvest–as in England–was three weeks late.

There was no ripened grain.  Not for the troops.  Not for their horses.  And a drought had reduced the streams and rivers to mere trickles…Half his troops and horses were dead before they ever crossed into Russia proper.  That’s what the weather did.

The winter of 1813-14 was so cold in Britain that the Thames froze solid for a month and a Great Frost Fair was held on the ice, with stalls and kitchens and even a main road…

The weather in the winter and early spring of 1814 was foul too.  Incessant rain in France, followed by sharp frosts which iced over the fields and froze the deeply rutted roads solid, made Napoleon’s preferred rapid marches impossible for his troops as he strove to fend off the multiple invading armies.  The years of bad harvests meant that there was little to feed his troops either–and they deserted in large numbers.

Even at Waterloo in 1815, the weather played a part.  The night before the battle, the rain pitched down upon the thousands of soldiers–some danced (yes, they literally did) instead of sleeping just to keep warm.  Cavalry officers slept standing in between their horses, partially covered by horse blankets, keeping warm with their animals and keeping the animals calm amidst the thunder and lightning.

The rain caused the red dye of the British infantry’s redcoats bleed into their white belts…And in the morning, the fields were seas of churned mud almost too slippery for the most measured cavalry charge.  (Somewhat like at Agincourt in 1415.)

You see?  The weather changes everything.  It changes outcomes; it changes our outlooks, it brightens; it dampens; it can drown us.  Weather was their friend, their foe, their constant companion and an endless source of conversation.

Until the 19th century, Britain was an agrarian society and a maritime society.  They listened to the wind, they listened to the steady beat of the rain on their tile roofs and worried how high would be the river at the ford, they knew the ragtime slap of water on leaves.

And I do believe that when we leave the weather out of books about Britain, we’re leaving out–maybe not her soul–but we’re omitting a most vital and formative element of her character… 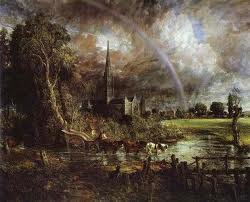 As I drove into Salisbury last evening, the cloud was so low and the rain so fierce that the splendid spire of the Cathedral (as painted by Constable) was no more than a spike of darker grey amidst the silver fog…

That’s what the weather can do.  Wonderful, isn’t it?

(And for the record, it’s now not been raining for six whole hours.  Huzzah…)

15 comments on “Speaking of the weather…”