What with one thing and another, I haven’t had much to say recently.

Part of that is down to having been reading The Challenge, a quite monumental history on the War of 1812 by Andrew Lambert.  And I shall be talking about that at a later date.

Once I’ve calmed down and am no longer throwing things at the jingoistic journalists of 200 years ago who just made stuff up rather than reported anything like the truth.

But also of late I’ve been doing  a bit of garden writing for another blog.  And one of the subjects which I chose to visit was Gertrude Jekyll, the famed Victorian/Edwardian artist and gardener… 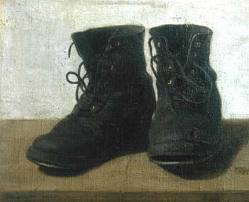 And this is a funny thing, really.  Because in collecting all my books about her together, and in reading through many sections of said books, I was suddenly struck by how much about her I’d known but had forgot.  Which came as a bit of a surprise.  But most of all, I was reminded of how much she’d taught me.  Not just about gardening and plants, but about writing, about seeing, about life, about beauty.

So I’ve continued to just read her collected works.  And it’s been a marvellous homecoming.

You see, I’d never really considered it before, but it’s Gertrude Jekyll who taught me to write what I see.  I mean, the woman was utterly brilliant.  And possessed of a pioneering honesty.  And the process begins first with seeing.  Not seeing what we believe is there, but seeing what is there.

Jekyll writes about it this way:

“Those who have had no training in the way to see colour nearly always deceive themselves into thinking that they see it as they know it is locally, whereas the trained eye sees colour in due relation and as it truly appears to be.  I remember driving with a friend of more than ordinary intelligence, who stoutly maintained that he saw the distant wooded hill quite as green as the near hedge.  He knew it was green and could not see it otherwise, till I stopped at a place where a part of the face, but none of the sky-bounded edge of the wooded distance, showed through a tiny opening among the near green branches, when, to his immense surprise, he was it was blue.”

Or this:  “On some of those cold, cloudless days of March, when the sky is of a darker and more intensely blue colour than one may see at any other time of the year, and geese are grazing on the wide strips of green common, so frequent in my neighbourhood, I have often noticed how surprisingly blue is the north side of a white goose.  If at three o’clock in the afternoon of such a day one stands facing north-west and also facing the goose, its side next one’s right hand is bright blue and its other side is bright yellow, deepening to orange as the sun ‘westers’  and sinks, and shows through a greater depth of moisture-laden atmosphere.”

Wow!  Holy wow.  That is seeing!  Seeing what’s truly there, embracing it really, in all its brilliant or soft and wonderful glory.

And then, once seen, written…

And behold, a whole world is created with those words…a whole scene…you can picture it…you can see it, taste it, feel the mist of it falling on your face, soft as lamb’s wool, cool as spring.

I remember her talking about bark–how it’s grey and black and ridged and often greened over with moss.  She saw what was there…and through her seeing, shews us.

But Jekyll listened too.  She knew how to listen.

“I can nearly always tell what trees I am near by the sound of the wind in their leaves, though in the same tree it differs much from spring to autumn, as the leaves become of a harder and drier texture.  The Birches have a small, quick, high-pitched sound; so near that of falling rain that I am often deceived into thinking it really is rain, when it is only their own leaves hitting each other with a small rain-like patter.  The voice of Oak leaves is also rather high-pitched, though lower than that of Birch.  Chestnut leaves in a mild breeze sound much more deliberate; a sort of slow slither…”

She’s a wonderful guide, and it is most assuredly thanks to her that I have turned my whole being to this business of listening and seeing–with all pores open to the world around–which is at the heart of any effective descriptive writing.

As I’m sitting here, I’m recalling many of  the things she shewed me, scenes I could never have fully appreciated without her opening my eyes to what was there, scenes which I wrote in Of Honest Fame off the back of that seeing and which are as dear to me as the portraits of my children.  And thinking on that,  I believe I must owe her an enormous debt of gratitude.

Though possibly–as she was such a wry and winsome creature–the thanks she might hope for and those I can most certainly give, rather as a disciple, is a going forth and seeing likewise…

8 comments on “The artist who taught me how to see…”